Posted by Chris Callis at 8:16 AM No comments: 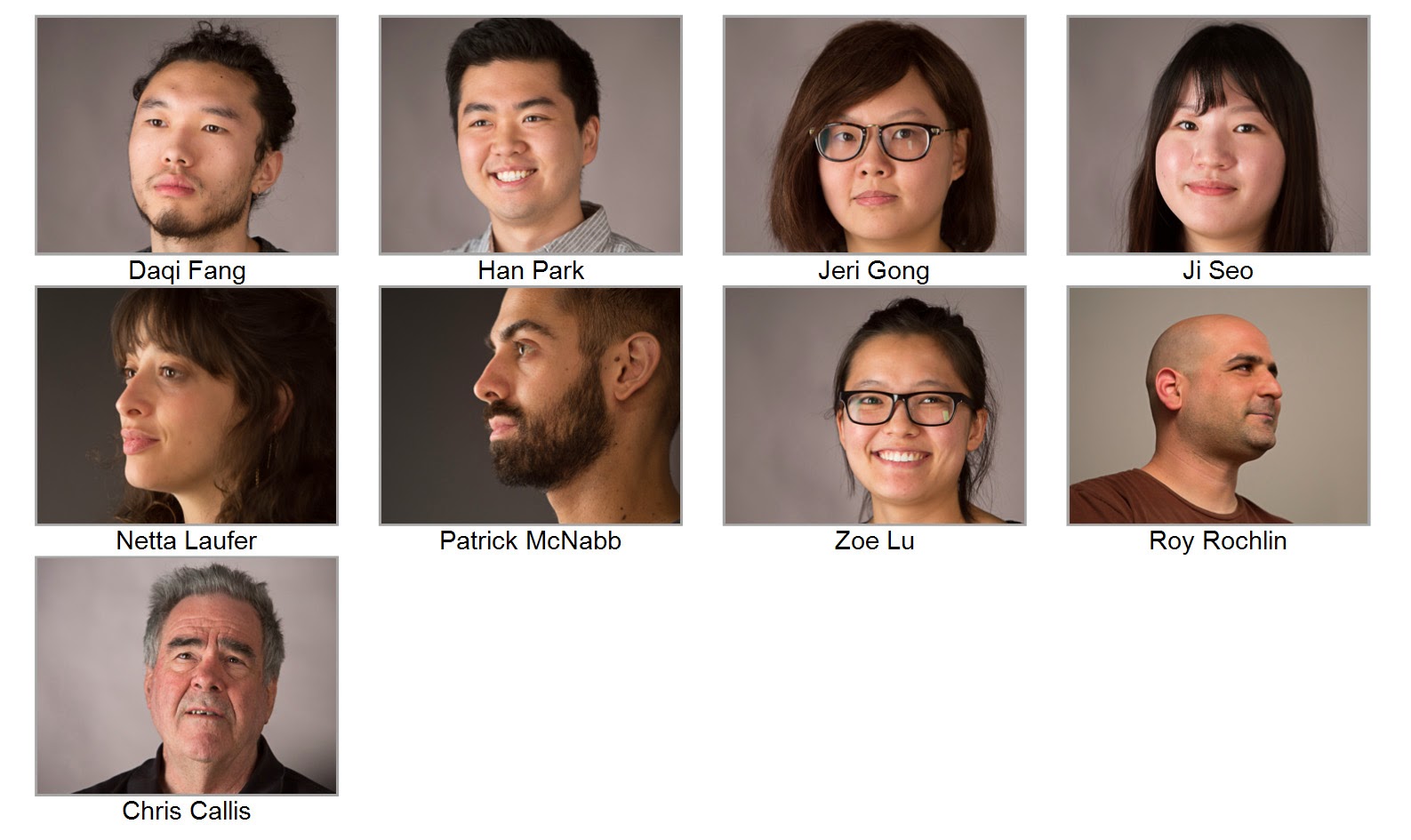 Four Camera Interview with 2 Recorders and Lit with Lowell Omni Lights
The Style of the Interview will be like the New York Presbyterian Hospital Commericals The films are directed by Peter Rabot at Lost Highway Films.
There will be three mark III's on tripods and one hand held Mark III filming wider shots including the setup and the crew.  A shotgun mic on a boom 2 feet from the interviewee and recording to a Zoom H4n plus a lavaliere on a Sennheiser wireless transmitter recording to a second Zoom H4n.
The cameras will all have the exact same setting and the two H4n's will set the same also.  See below for exact settings.
I will assign a job to each person in order to prevent a situation like this Problems on the set with Steve Buscemi

·         Director
The director is responsible for overseeing the creative aspects of a film, including controlling the content and flow of the film's plot, directing the performances of actors, organizing and selecting the locations in which the film will be shot, and managing technical details such as the positioning of cameras, the use of lighting, and the timing and content of the film's soundtrack. Though directors wield a great deal of power, they are ultimately subordinate to the film's producer or producers. Some directors, especially more established ones, take on many of the roles of a producer, and the distinction between the two roles is sometimes blurred.
·         First assistant director
The first assistant director (1st AD) assists the production manager and director. The ultimate aim of any 1st AD is to ensure the film comes in on schedule while maintaining a working environment in which the director, principal artists ( actors) and crew can be focused on their work. They oversee day-to-day management of the cast and crew scheduling, equipment, script, and set. A 1st AD may also be responsible for directing background action for major shots or the entirety of relatively minor shots, at the director's discretion.
·         Director of photography
The director of photography, DoP or DP, is the chief of the camera and lighting crew of the film. The DoP makes decisions on lighting and framing of shots in conjunction with the film's director. Typically, the director tells the DoP how he or she wants a shot to look, and the DoP chooses the correct lens, filter, lighting and composition to achieve the desired aesthetic effect. The DoP is the senior creative crew member after the director.
The term Cinematographer is usually synonymous with director of photography, though some professionals insist this only applies when the director of photography and camera operator are the same person.
·         Camera operator
The camera operator uses the camera at the direction of the cinematographer, director of photography, or the film director to capture the scenes on film or video. Generally, a cinematographer or director of photography does not operate the camera, but sometimes these jobs may be combined.
·         First assistant camera
The first assistant camera, 1st AC or focus puller, is responsible for keeping the camera in focus as it is shooting, as well as building the camera at the beginning of the day and taking it apart at the end. They also thread the film when a new magazine is loaded.
·         Gaffer
The gaffer is the head of the lighting department, responsible for the design of the lighting plan for a production. Sometimes the gaffer is credited as chief lighting technician.
·         Key grip
The key grip is the chief grip on a set, and is the head of the set operations department. The key grip works with the director of photography to help set up the set and to achieve correct lighting and blocking.
·         Production sound mixer
The production sound mixer is head of the sound department on set, responsible for recording all sound during filming. This involves the choice and deployment of microphones, operation of a sound recording device, and the mixing of audio signals in real time.
·         Boom operator
The boom operator is an assistant to the production sound mixer, responsible for microphone placement and movement during filming. The boom operator uses a boom pole, a long pole made of light aluminum or carbon fiber that allows precise positioning of the microphone above or below the actors, just out of the camera's frame. The boom operator may also place radio microphones and hidden set microphones. In France, the boom operator is called the Perchman.
http://en.wikipedia.org/wiki/Film_crew
We will use standard filming commands as follows

from http://production.4filmmaking.com/directing-films.html
The Lighting and Camera Position Diagram
The Still Photographs 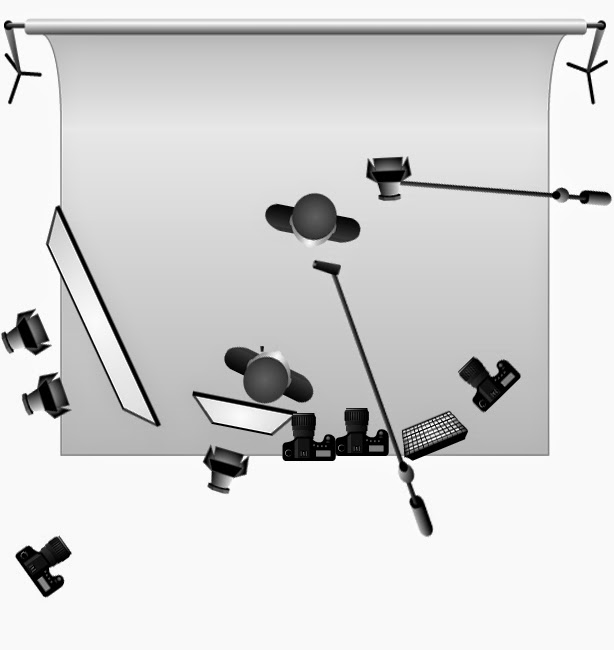 We will shoot our still images while in live view mode and while the cameras continue to capture video. We use the exact same setting as set for video.  The director will call for a still session and direct the interviewee where to look and what to do while all 4 camera operators photograph at will. 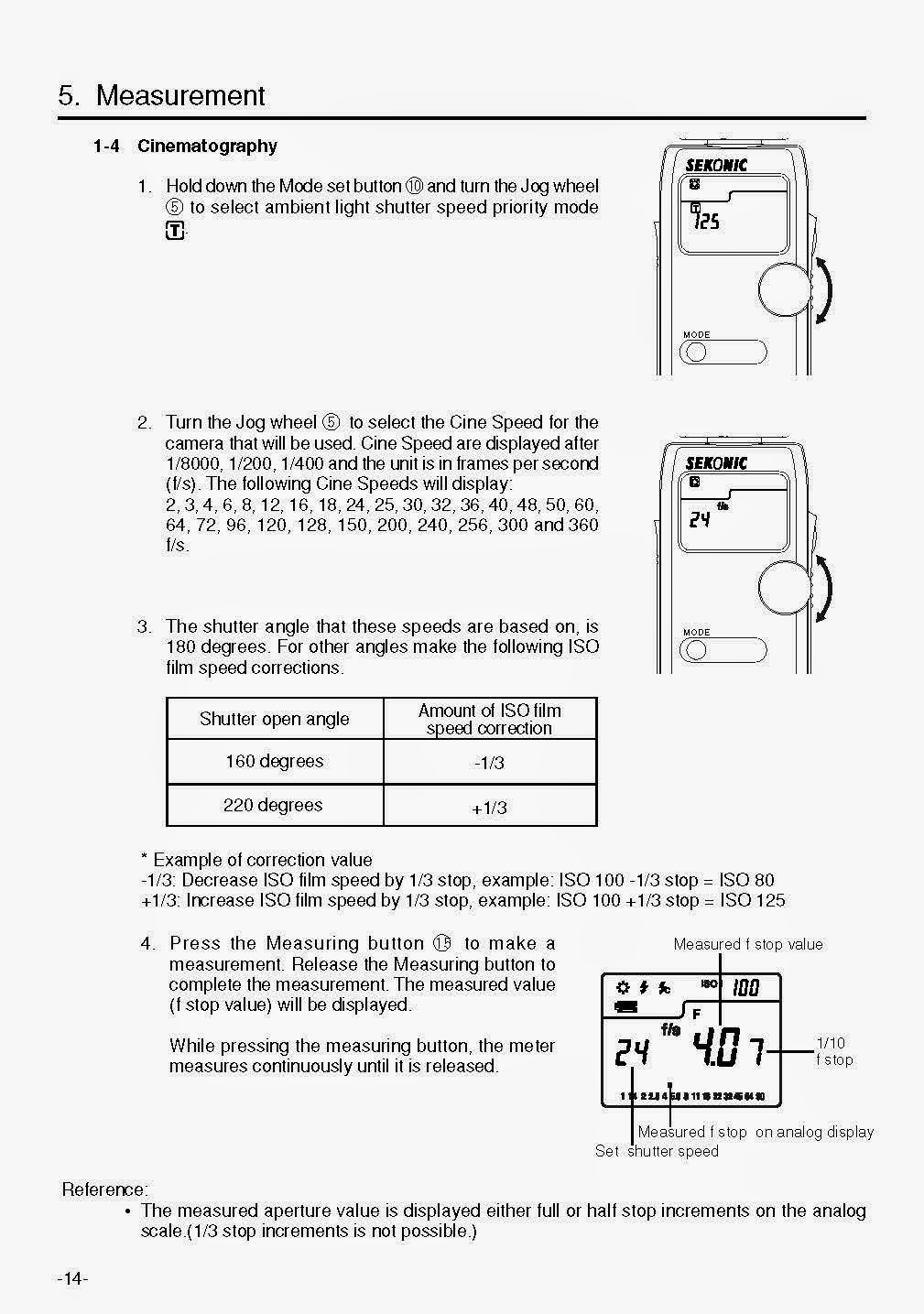 Zoom H4n Recorder
Operating guide
Set both recorders the same
Format the SD Card
Turn Mic Lo Cut Off
Turn Comp/Limiter Off
Turn Rec Level Auto Off
Set Rec Format to WAV44.1 kHz/16bit
Recorder 1 with shotgun mic on a boom 2 feet from the interviewee to left channel and a 2nd shotgun mic for interviewer on right channel
Adjust sound levels so it is peaking between -12 and -6

Editing
Each person will be filmed continuously after the marker has been executed.  At the end of the interview there will be a still session instigated while the cameras are still rolling.  The camera will stop only after the director says "Cut".
After the all the interviews are completed, a new folder will be made for each interviewee and files from the 4 cameras and the 2 recorder will be copied to this folder.
In Premiere Pro CC there is a special way to edit a multi camera session.  Here are two links to help you understand the procedure:
A Quick Walkthrough of Editing a Multi-Camera Sequence with Clips Synchronized by Audio
or on Lynda.com


Posted by Chris Callis at 7:34 AM No comments: 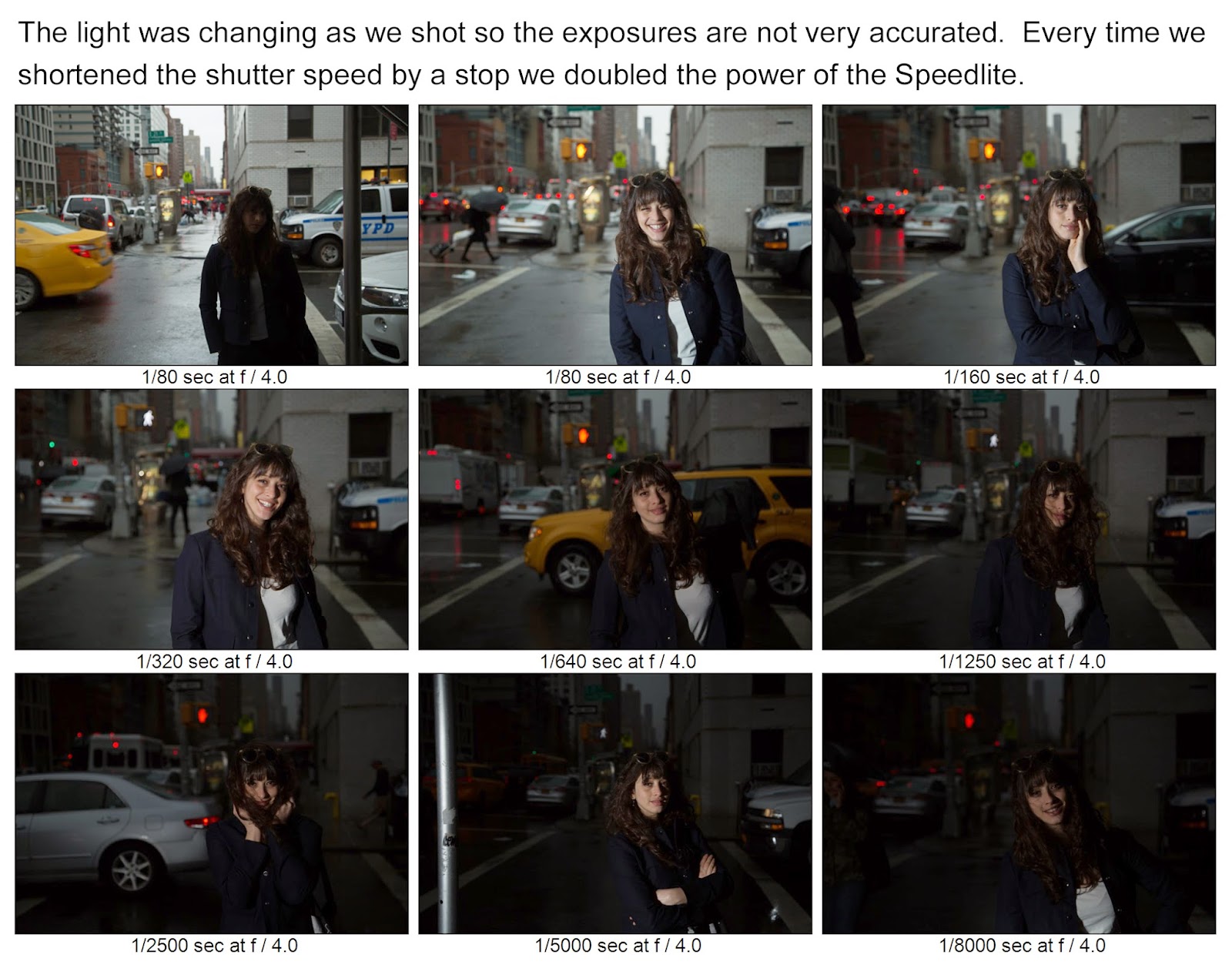 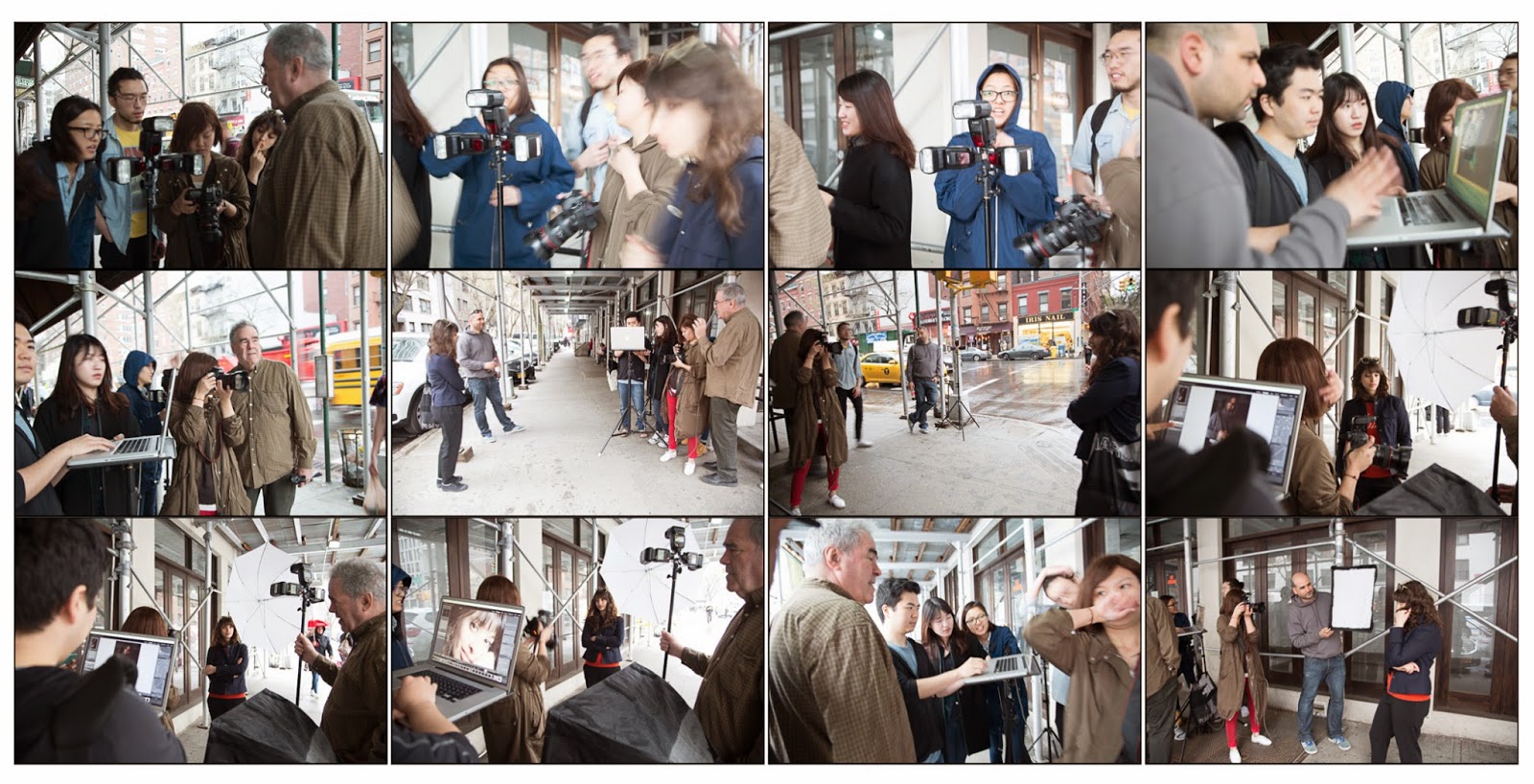 Posted by Chris Callis at 7:13 PM No comments:

Photograph something in action that you can’t see with the naked eye.  Use a camera and flash combination on manual attached to the hot shoe or the off camera cord.  The flash should be dialed down to 1/16 power or less in order to achieve a flash duration of 1/10,000 or less.  Examples are splashing water or stopping a fans blades with a ribbon attached.  I want these images super sharp with no blurs.

Post a photograph that you like the lighting and that you wish to emulate. Sketch out how you think it was lit. You can use this file to make your sketch:http://www.diyphotography.net/lighting-diagrams
Posted by Chris Callis at 9:37 AM No comments:

Using the PocketWizard Plus III and a shutter speed highert than 1/160 results in second curtain cutoff. 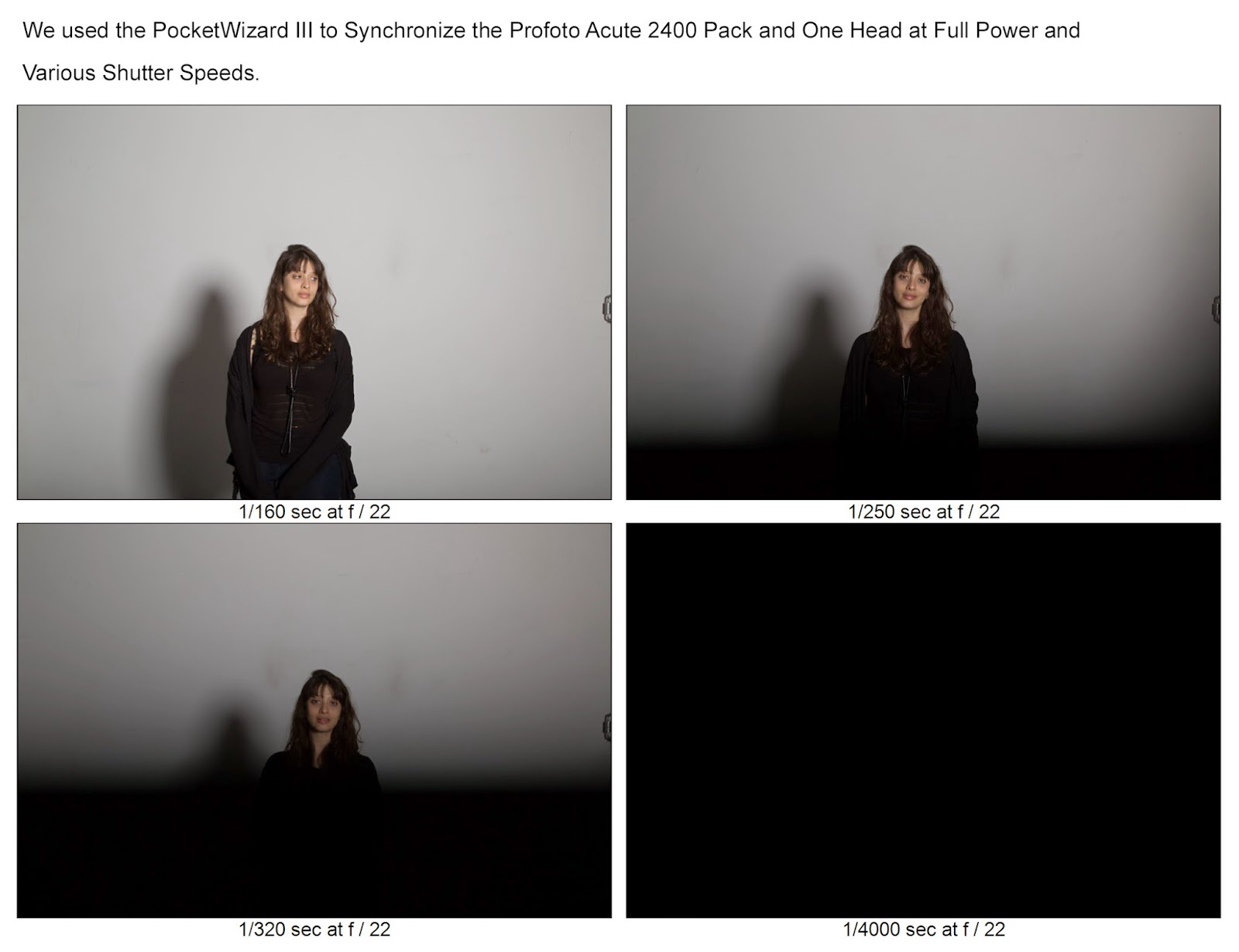 Using the PocketWizard Flex TT5 and the setting HyperSync, we were able to sync up to 1/8000 using the Profoto 2400 Pack at full power and a flash duration of 1/320 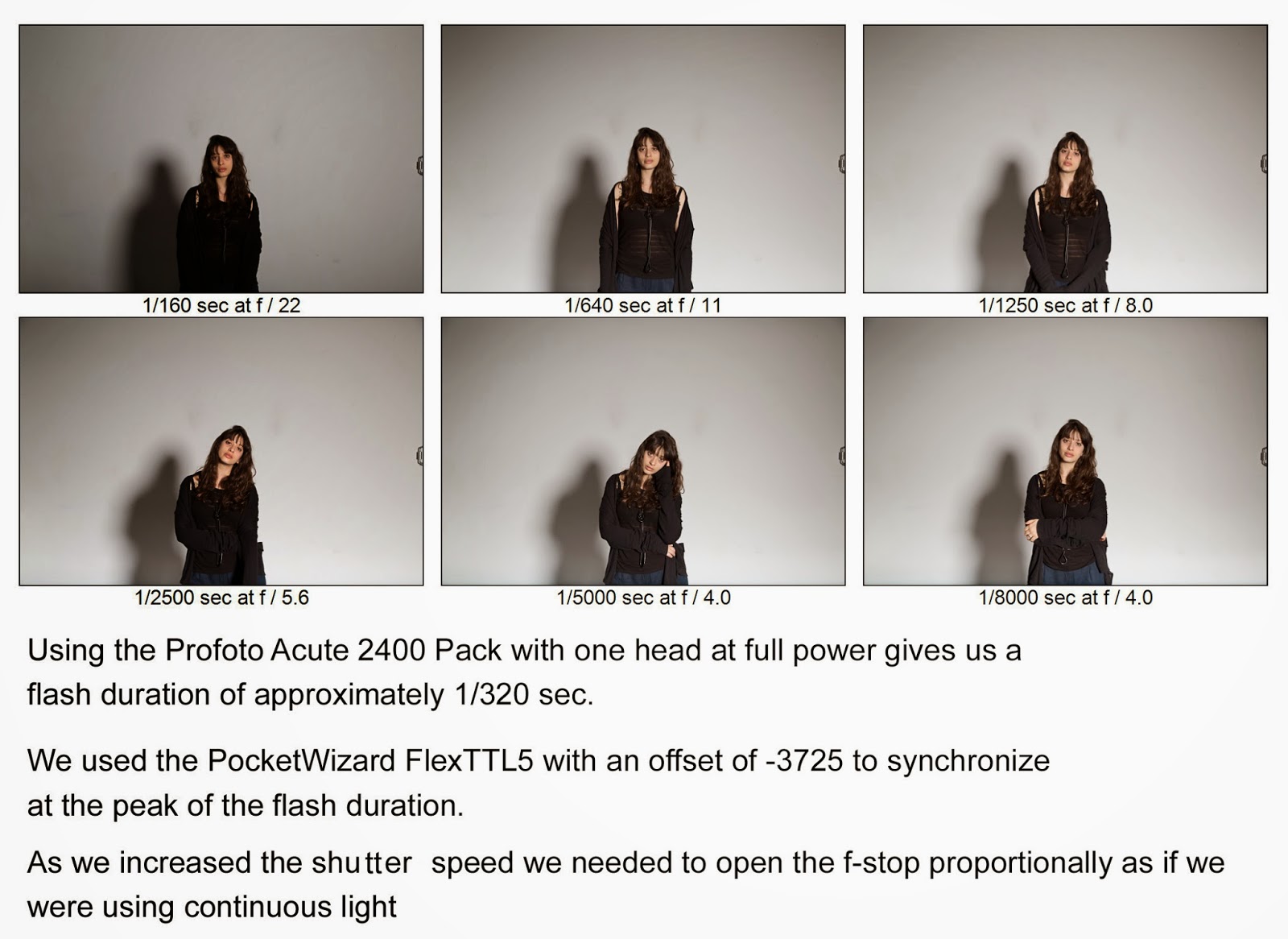 Using the High Speed Sync setting on the Canon Speedlite 600EX-RT, we were able to sync up to 1/8000 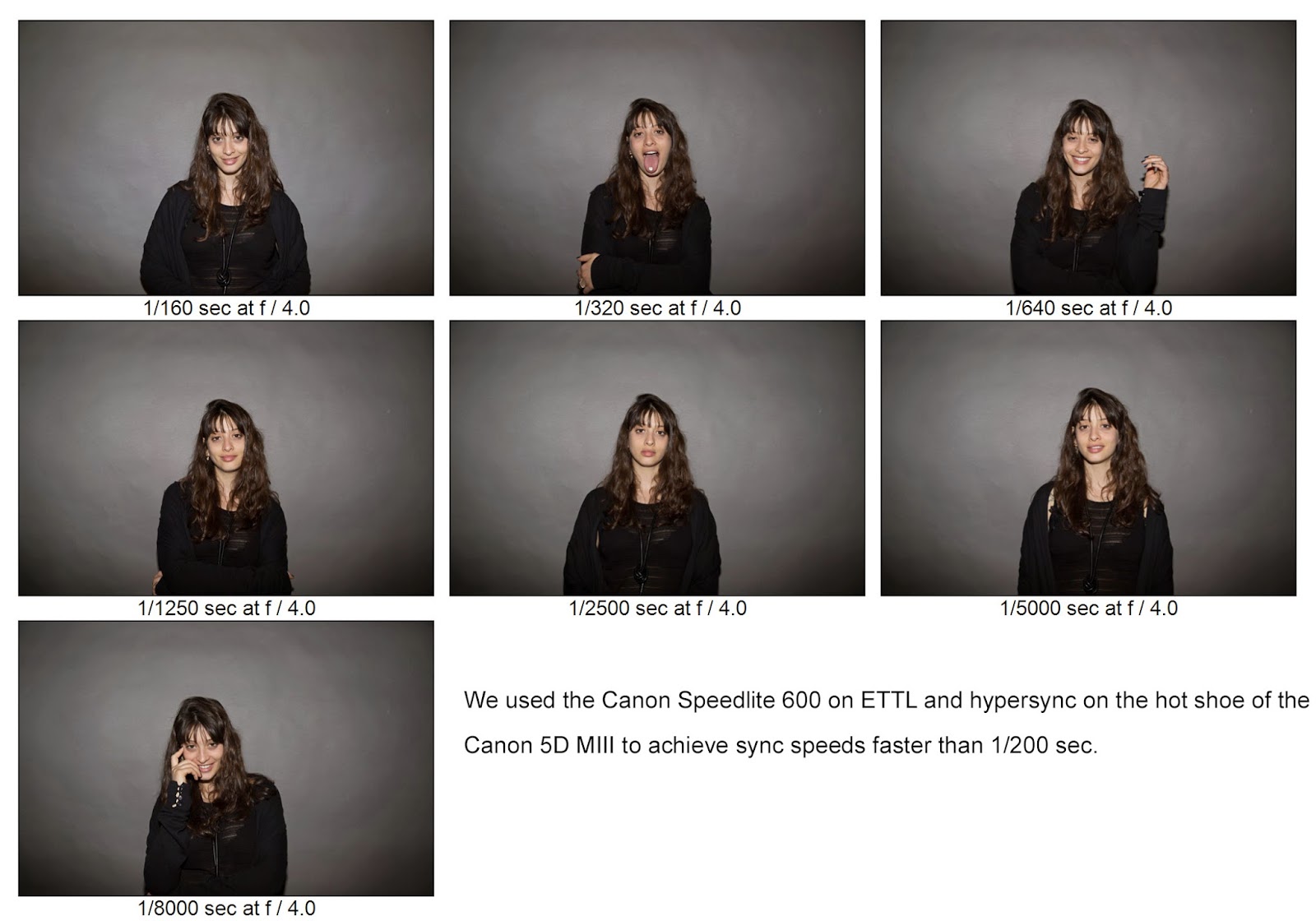 The HiViz SK2 Sound Trigger is an inexpensive way  to set off a strobe with sound.

An explanation of Paul C Buff Einstein strobe to show the two different ways strobe manufactures control the flash output and what that has to do with stopping power and color temperature.
PocketWizard's explanation of HyperSync and HighSpeed Sync
Another blog that we looked at about using the PocketWizard FlexTT5 on High Speed Sync (HSS) mode you could sync our studio strobes at a 1/8,000 sec. 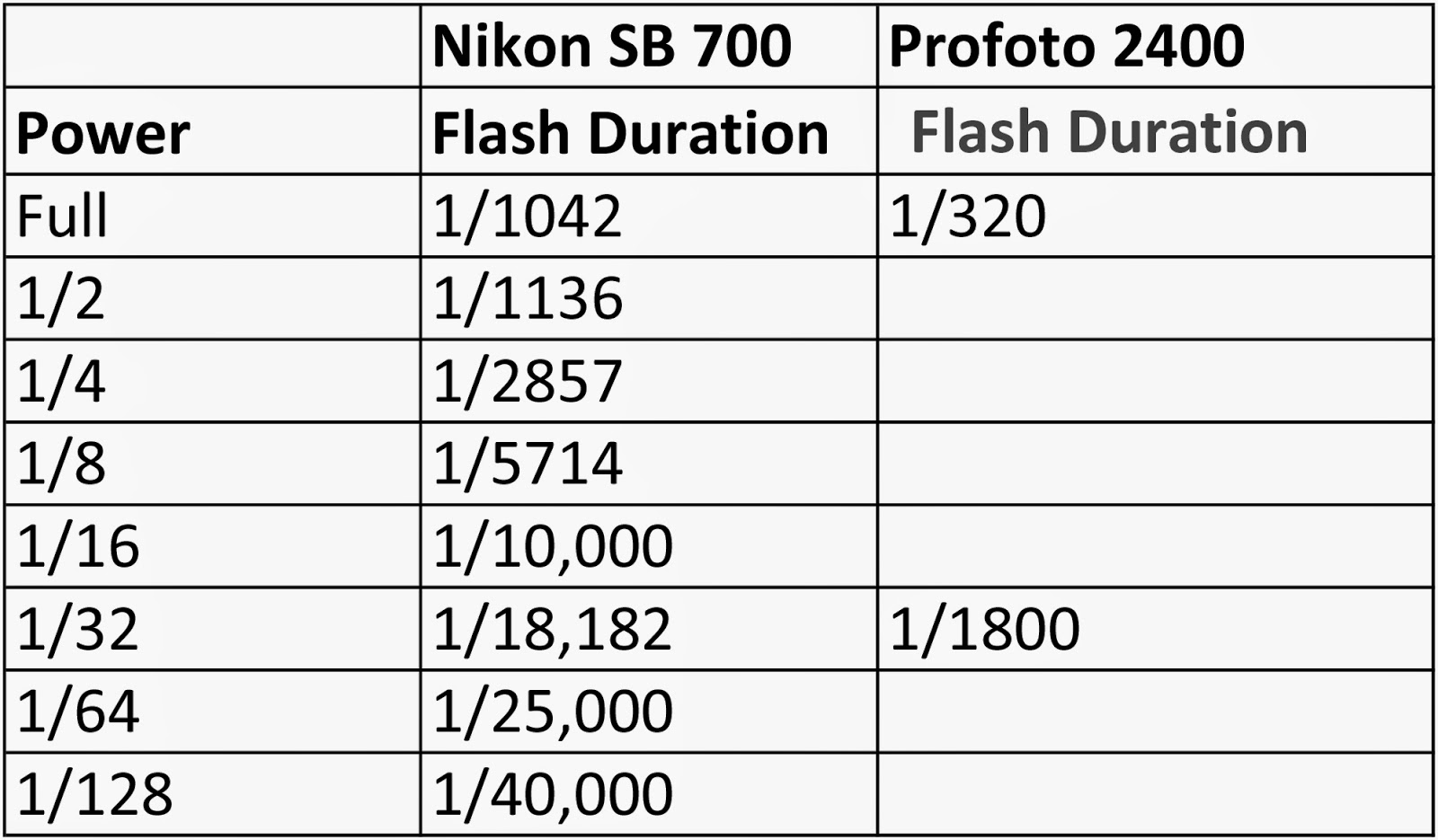 Posted by Chris Callis at 9:33 AM No comments:

Go outside between dusk and dawn using whatever existing light is available recognizing the properties of light we learned and used in the studio and how it occurs at night.  Make a photograph that is surprising by what it reveals.

Posted by Chris Callis at 8:20 AM No comments:

We looked at the work of a few photographers whose vision of the night is unique. 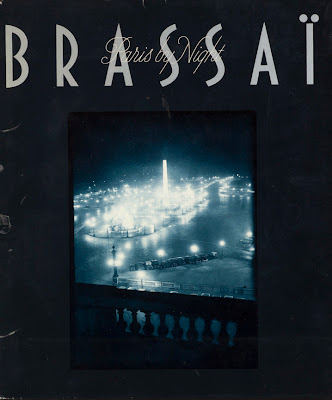 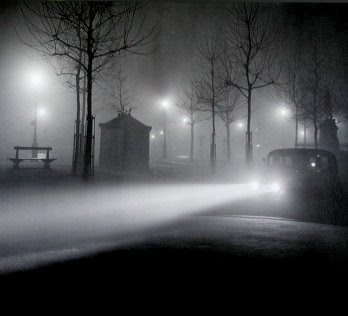 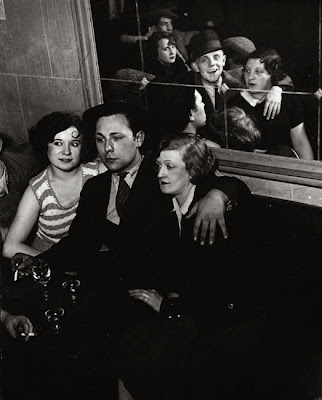 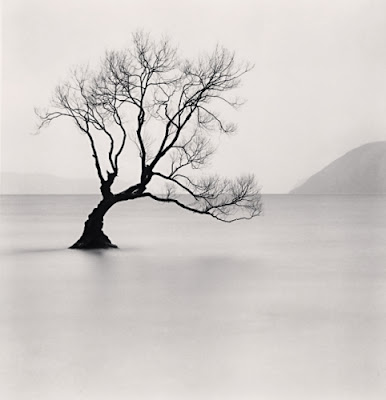 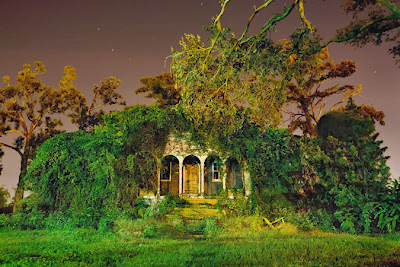 Posted by Chris Callis at 8:06 AM No comments: